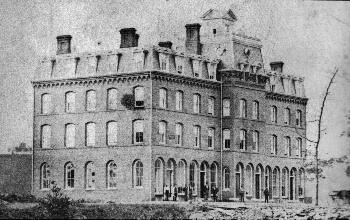 In early 2012, there was a "Brain Trust" meeting called by Lisa Davol, who was the Turners Falls River Culture coordinator at the time. She needed office space. At this meeting, Mik Muller asked Frank Abbondanzio whether the old Cumberland Farms building was still occupied by the arts organization or the Native American organization that once occupied it. He said no.

And so started a seven-year saga of MCCI trying to purchase the building and turn it into the Grand Trunk Media Center, named for the famed hotel that once stood on that land. Between then and now, MCCI board members worked with the Montague Economic Development and Industrial Corporation (EDIC) and the Cable Advisory Committee (CAC) to approve the sale (EDIC) and approve the purchase (CAC), and provide whatever support they could.

Mik also worked with Rep Steve Kulick and State Sen Stan Rosenberg to apply pressure on the Department of Conservation and Recreation (DCR), who had done the actual "taking" of the building from Cumberland Farms and set the buildings usage to specifically environmental education. Steve and Stan got DCR to expand it to include cultural uses, which MCTV could be considered, and thus allowed to occupy the building, which had been empty and falling apart for years.

After many delays, both technical and otherwise, and three attempts by the town to demolish the building (all three times defeated by Town Meeting), the project just petered out while the Town focused their attention on selling the building to a local river rafting company. In spring of 2019, they pulled out of consideration, and so the Town of Montague no longer had a buyer for the building.

MCCI is prepared to submit a new proposal, with a coalition of key stakeholders and other individuals of influence. It is their hope that 2019 will be the year that the Town of Montague finally supports MCCI, the Montague Business Association, and Turners Falls RiverCulture, in their effort to create the Grand Trunk Media Center.

You can also find the minutes of the Montague EDIC meetings, here: https://www.montague-ma.gov/f/0/16/Montague-EDIC-Meetings

There are also a bunch of meeting files available to view on the EDIC page on the Town website.